Chefs Rethinking the Flavors of South America: From the Coast to the Andes

When cooking merged with science and chefs became celebrities, the culinary spotlights shifted from the western world to lesser-known food destinations. On top of the list is South America, a continent known for the diversity of its people, cultures, terrains, and not surprisingly, flavors.

From Brazil to Patagonia, from gaucho staples to complex tasting menus, from -5 meters below sea level to high up in the Andes, all eyes (and taste buds) are on this new culinary mecca. Thanks in part to the visionary chefs and their staff who unearthed the continent’s ancient food traditions and making them known to the world.

We’ve rounded up the best places to go for those craving for a natural, authentic, and memorable gastronomic experience in South America:

Mater Iniciativa is the brainchild of chefs and husband-and-wife Virgillo Martinez and Pia Leon, two visionary chefs who have helped expand the world’s ideas about Peruvian cuisines. It’s a food lab where a team of passionate cooks, botanists, archeologists, and artists dig up and explore indigenous lands for flavors gone by. Among the lab’s discoveries are hundreds to thousands of unique species of corn, quinoa, tomatoes, potatoes, wild herbs and botanicals, and a host of ancient cooking techniques.

The group travels across Peru collecting all sorts of ingredients, from unique tubers in the Andean Plateau to hardy crops that grow on snow-covered mountaintops. It explores the banks of the Amazon and the rugged coasts of Lima in search of fresh water and coastal flavors.

Its discoveries are then brought to the kitchen of Central, which ranked number 6 in the World’s 50 Best Restaurants 2018, where patrons feast on an 18-course dinner highlighting the many ecosystems of Peru. Located in the hip Barranco District of Lima, the restaurant treats its guests to out-of-the-ordinary experiences that straddle the line between culinary and archeological, but always with a modern twist.

For a more immersive experience, there’s Mil, a recently opened restaurant by the renowned couple. It’s located way up in the Andes, at 11,500 above sea level, on the edge of the ruins of Moray. Here, guests can harvest potatoes or forage native tubers with the locals. Each dish is made strictly using what’s available in the region. The goal is to rediscover, rethink, and preserve indigenous ingredients and cooking techniques, and at the same time leave guests satisfied and “breathless.”

Open-Fire Cooking in Wild Patagonia with a Nomad Chef 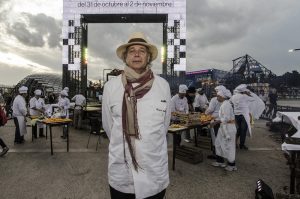 Francis Mallmann owns multiple restaurants in Buenos Aires, Chile, Uruguay, France, and Miami, which he often travels to and lives in periodically like the nomad that he is.  But La Isla, a remote island in Patagonia, is where he always finds himself coming back to. His private retreat, a simple yet elegant cabin he named La Soplada, is embraced by the tranquil Lago La Plata with the snowcapped Cerro El Gorro mountains in the background. It’s a no Wi-Fi or cell service zone, so you’re left to immerse in the the raw, erratic beauty of wild nature.

Despite being an acclaimed chef with classic French training, his current methods are anything but formal, a clear departure from the sometimes too rigid walls of culinary art. On his private island, Mallmann roasts whole lambs, chicken, seasonal produce, beef ribs, and basically every vegetable or fruit you can think of skewered in a huge open pit where he pays homage to fire rather than cook with it. “You have to understand what happens with fire; all those different temperatures are the beauty of cooking with it,” he told CN Traveller Magazine.

One might think Mallmann is a pure romantic doing his own thing. But his cooking methods and ideas about fire are deeply rooted in Argentine cuisine. He uses the simplest ways of cooking with materials available in the area: wood, coal, clay, sand, hot stones, leaves, ashes. The landscape is his kitchen, and the earth his grill and oven, just how the gauchos built their curantos and roasted wild cattle. Even desserts, like his signature dulce de leche crepe, are cooked on a scorching cast iron griddle called the plancha. Sure, Mallmann’s French culinary training still shines through in the understated elegance of his meals, but the rusticity of Argentine staples is what emerges from his bonfires.

An authentic Chilean experience awaits at Borago, ranked number four in Latin America’s 50 Best Restaurants list and recipient of the 2018 Sustainable Restaurant Award. Owned and led by the country’s most famous chef Rodolfo Guzman, Borago is a stage for Chilean ingredients, including indigenous herbs and raw materials, home-reared cows and ducks, and over 750 varieties of seaweed. Behind the visionary chef is a team of 200-plus people growing, foraging, and rearing these ingredients with social responsibility and sustainability in mind.

If Central has altitude-based dishes, Borago’s menu is based on Chile’s micro seasons. Most of the ingredients come from the chef’s biodynamic farm located 30 minutes away from the restaurant. Each dish is thoughtfully created and demonstrates the connection with the land. On top of the farm-to-table concept, sustainability is the ethos all throughout, from the furniture handmade using local lumber to the aprons made using eco-friendly materials.

But the star of the show is its unique menu crafted from ingredients you probably haven’t heard of before. Dine at Borago in Santiago and have a taste of Chile, preferably with a bottle of wine made from uvas de Montaña.

Before her taste of the limelight in the prestigious culinary competition The Final Table, Helena Rizzo was already making waves in Brazil and beyond. She was named the Best Female Chef of the Year by Restaurant Magazine in 2014 and her restaurant Mani has earned multiple accolades. Rizzo’s creations feature the finest Brazilian ingredients prepared using a mix of regional and European techniques. So expect to find foie gras “bonbons” with guava paste, edamame, and banana with manioc flour. The food in Mani is contemporary, influenced by her culinary training in Italy and Spain, but is deeply anchored on ingredients symbolic of Brazilian cooking.

These chefs have been instrumental in spreading the gospel about South American food traditions across the globe. Thanks to them, gastro-tourists and culture buffs, alike, are scrambling to get a t

Previous Post
The Trickiest Wedding Planning Dilemmas, Solved
Next Post
In Search of Birds and Barren Lands in the Fabled Edge of the World