On a wind- and sea-battered cliff in Ahu Akahanga lies a massive moaistatue, once standing tall but toppled over by Rapa Nui men during a period of social unrest. The statue, which the locals circled with rocks as protection from tourists, may soon be swallowed up by the ocean as the cliffside, along with many other sacred locations on Easter Island, continue to erode.

This was my first descovery on my first day in the fabled island. After a full day of learning about the island’s rich cultural heritage, I then found out it was all going to be erased – again.

My tour guide Bruna and I took a moment of silence after he warned me of the fate of the island. Rising sea waters and climate change will put the already vulnerable island to the brink of extinction. Its population of roughly 5,000 people will become refugees, again, and the more than 1000 moai statues ringing the island will soon exist only in photographs.

Before that, I asked Bruna if moving the statues a few meters back or to a museum in mainland Chile was an option. He was polite enough to answer me, but in hindsight, I realized how naïve and apathetic it was for me to even ask such a question. By removing the statues from where they were originally placed, they will lose their context and history. They become relics of days gone by, instead of essential threads to a people’s identity. 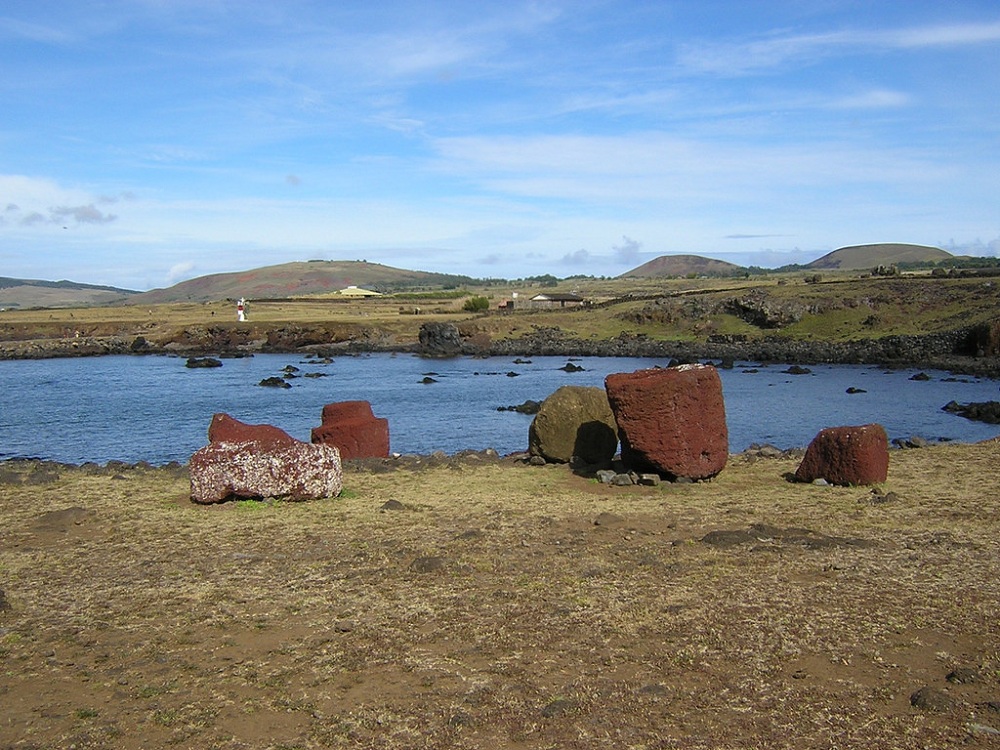 But this is more than an archeological issue. A few decades from now, there will be no sandy beaches lining the coasts, just sharp, rocky edges beaten by the waves. No birds will nest and mate on Motu Nui and big migrationswill just become stories told by parents to their children. Hanga Roa, the main town, harbour, and capital of the island which sits on the sheltered west coast, is bound to disappear, as well.

I was escorted to my lodge just before sundown. The dinner I ordered in advance, a generous helping of fish and vegetables wrapped in plantain leaves and cooked in the ground with firewood and hot stones, was already waiting in my private deck. From the deck, I can see a narrow strip of the Pacific Ocean looming over a desolate landscape. I wondered if there was any hope on the horizon. I was ushered into a peaceful slumber by the whistling wind and rustling leaves of palm trees outside. But I clung to the many questions I had for Bruna, which I asked without hesitation until the last day of my trip. 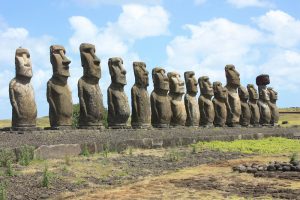 Easter Island’s history has always been shrouded in mystery. But efforts have been underway to uncover what really caused the collapse of what was once a sophisticated civilization. So far, archeological evidence points to myriad but interrelated reasons. A combination of artefacts, oral history, and accounts from foreigners who lived on the island reveals that the Rapa Nui people, an advanced, sea-faring group of Polynesian origin, started building statues and cultural monuments upon settlement.It is believed that these massive statues, which, at the time, showed engineering prowess, were built to honor chiefs, ancestors, and other important personages.

By the time over 1000 erect statues ringed the island, the surrounding landscape already suffered significant deforestation. It appears that huge logs were used to transport the statues from an inland quarry to various sites across the island. Canoes, which the natives used to fish and send their dead out to sea, were also carved out of giant trees like Toromiro pines.

When the first Europeans arrived in the 1722, over 21 species of trees and all species of land birds became extinct due to overhunting. The locals could no longer build seaworthy vessels, so seafood was scarce, if not nonexistent. Bananas, sugar cane, and potatoes kept them from famine.But most scholars say that the island’s widespread deforestation and population decline were exacerbated when the Europeans set foot on the island. They brought diseases with them that wiped out most of the populatio and introduced the Polynesian rat which further depleted the island’s vegetation. Conflict among local tribes ensued and the caste system challenged, evidenced by themoais toppled over and several petroglyphs.

When the island was annexed by Chile, the Rapa Nui people somehow evaded further downfall. Since then, progress has been made on the island, including its declaration as a UNESCO World Heritage Site which brings in the funds to preserve its cultural treasures and uncover the rest of the island’s history. But with the unforgiving PacificOcean encroaching all around the coast, archeologists, archeologists, and the locals find themselves racing against time.

A Bleak Future for Pacific Islanders 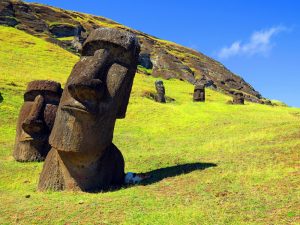 It’s only a matter of time before the current and future generations of Rapa Nui are forced to leave their home again. Similar fates are faced by islands across Oceania. They, too, will soon succumb to ecological collapse. Like Easter Island, archipelagos in this region will watch their homes, culture, and heritage be swept away with the waves, slowly, until the only logical thing to do is leave. The future is bleak for these tiny nations, and there’s hardly anything we can do to save them.

At the moment, Easter Islanders and a band of scholars and conservationists are doing their best to build seawalls and finding new ways to mitigate further soil erosion. They’re doing it not because they believe history can be reversed, but because every second counts on Easter Island. There’s not enough time to plant more trees and introduce biodiversity, but there is enough time to try. And more importantly, there’s enough time to uncover more stories and artefacts about this enigmatic people and culture.

In two week-long stay on Easter Island, I managed to see every single moai, petroglyph, rongorongo tablet, grave site, and every other important piece of the Rapa Nui puzzle. And every single bit of it is worth saving.I met a handful of people whose dedication to put the island on the map is inspiring and spread the word about climate change is deeply inspiring. And every single one of them is optimistic about a happier ending.

On my last day, I thanked Bruna for showing me around and hoped to see him again, happy and safe – home.

Previous Post
In Search of Birds and Barren Lands in the Fabled Edge of the World
Next Post
Disconnect to Connect: Boutique Hotels in the Middle of Nowhere