How Would You Like It? The Different Degrees of Steak Doneness

Many people like to treat themselves to a perfectly-cooked steak now and then. The savory flavor of meat cooked just right paired with delicious sides and a proper drink to complement the experience is enough to make anyone’s night.

People have their own preferences for the way their steak is cooked. Personally, I prefer a nice medium rare with a good sear and red center. However, I find that some restaurants don’t get the differences among steak doneness degrees and, worse, tend to get it wrong.

Sometimes, I get steaks with a nice sear but is completely red on the inside. Other times, I get a steak that’s borderline well-done and has lost the juicy flavor that comes with a medium rare steak.

What is Steak Doneness?

A steak’s doneness determines how thoroughly it was cooked, which affects its color (less done steaks resemble raw meat on the inside compared to fully-cooked steaks), flavor and juiciness, and temperature.

The concept of “doneness” in the culinary industry also refers to other meats such as lamb, pork and poultry, but some meats (e.g. chicken) aren’t safe to consume unless fully cooked.

For steaks, the most common levels of doneness are blue, rare, medium rare, medium, medium well and well-done. Look over the chart below for a visual guide.

If you’re squeamish about eating steak considered blue, don’t worry: the United States Department of Agriculture has a standard on the minimum temperature to cook steaks.

Even if blue rare steaks are mostly red, when cooked to at least 145 degrees Fahrenheit (63 degrees Celsius), the bacteria on the meat dies.

If you’re cooking blue or rare doneness, let the meat sit for at least three minutes to let the heat fully clean the bacteria.

How to Tell Steak Doneness

The color of the meat and juices are not a good indicator of whether the meat is safe to eat; it’s best to use a meat thermometer.

Use a Meat Thermometer

Check the temperature at the center of the meat – this is the best indication to determine if you’ve cooked the steak to its perfect level of doneness. 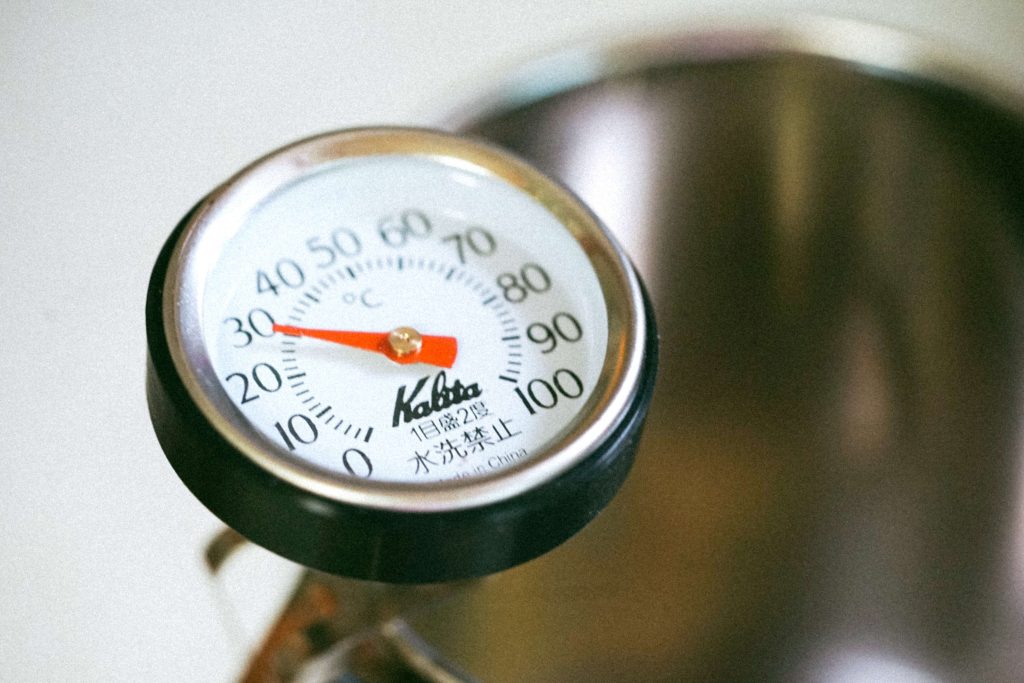 If you don’t have a meat thermometer in your kitchen, there are two other ways to measure the doneness. However, a lot of this is guesswork, so unless you’re totally sure about your skills, it is best to use a thermometer.

Take one of your hands and hold it out palm side up. Using the index finger of your other hand, press muscle area on your palm between the bottom of your thumb and your wrist. If your palm is flat, you won’t feel any bone or resistance underneath it. This is a rough estimate of what raw meat feels like.

While your steak is cooking, press the meat and compare the toughness with your hand. It should be a rough estimate to help you determine if you’ve got a medium rare steak or a medium well steak.

Blue steak gets its name from the bluish-purple color the meat inside still has. It doesn’t stay blue for long, though, as it turns red from the blood still inside the meat. Blue meat looks cooked and seared on the outside, but on the inside, it still looks raw. It’s kept in the pan long enough just to get a sear on the outside, but does not affect the inner meat.

To get a perfect blue steak, simply sear the steak for a minute on either side. Sear the sides for a few seconds before taking it out of the pan. If you’re using a meat thermometer, the internal temperature should be less than 29 degrees Celsius. When you cut into your steak, it should look completely red on the inside.

Rare is a step above blue, but it’s still within the area of raw meat. Rare steak is charred and seared on the outside and 75 percent of the meat inside is still bright red. The meat is still soft without that much resistance, but it is warmer on the inside compared to blue steaks.

To get a perfect rare cook on an average one-inch steak, place the steak on a pan for two and a half minutes before turning it over and cooking it for another two and a half minutes. The temperature should be up to 55 degrees Celsius at the center. When you cut into the steak, it should look mostly red at the center, a little pink on the sides, and a brown sear on the edges.

Medium rare steak is the most recommended level from chefs. It is cooked enough that the heat makes the steak warm, but with a red center that still seals in flavor. It’s not too soft, but it’s also not tough, and it’s just one step away from medium, where all the red has been cooked to a light pink.

Place the steak over the heat and cook it for three and a half minutes on each side or until it has a temperature of 50 to 63 degrees Celsius. To perform the finger test, create a circle with your thumb and middle finger and press on the muscle at the base of your thumb. The meat should have some resistance but still stay soft.

When you cut it open, a medium rare steak has a little bit of red on the center, but it is mostly pink. If newly cooked the insides must be warm to the touch as the heat has managed to cook at least half of the meat inside.

From medium onwards, the meat on the inside no longer has any raw-looking red parts in the center and ranges from pink meat to a light brown. If you’re cooking in large batches, medium steaks are the center point for everyone: it’s still slightly pink for people who like their steaks underdone but no trace of red for people who like their steaks totally cooked through.

Put your steak on the heat source for around four minutes on each side. This will provide your steak with enough time to cook through, but not enough that it remains pink even as you let it sit after taking it off the source. The center of your steak should have a temperature of around 63 up to 68 degrees Celsius.

When you cut into your steak, you should see that all the red meat has been cooked, but it’s still very pink meat. To perform the finger test, use your thumb and ring finger.

I’m not a fan of well-done steaks because they almost always turn out tough (it’s the toughest among all levels of doneness), dry, and require a lot more steak sauce just to get through a meal, but if you prefer your steak cooked throughout, at least learn how to do it the right way without burning the outsides.

Because you want the heat to cook through the entire steak, well-done steaks risk having a burnt exterior because it stays on the heat much longer. This arguably makes it the hardest to get right. The trick is to lower the heat source so that the steak has more time to cook down to the middle without having to burn on the outside.

Cook your steak over medium heat for around 5 minutes on each side or until it reaches a temperature of at least 75 degrees Celsius on the inside. For the finger test, use your thumb and pinky – it should be tough with a high amount of resistance. When you cut into a well-done steak, there should be no traces of red or pink and should be completely brown.

Tips for Grilling the Perfect Steak

Take your steaks out of the freezer at least 30 minutes before cooking; take them out even earlier if they’re thicker types of steaks. If you take your steak out and then immediately place it on a grill or pan, your steaks are still frozen to the bone. Not only will it take more time to cook (which could cause complications if you’re going for rare to medium steaks), but your steaks will not get evenly cooked.

At least 30 minutes before cooking them, take your steaks out of the freezer, remove the packaging, and place it on a plate. Leave it covered on a kitchen counter to defrost.

Don’t Move Your Steaks Too Much

Have a timer ready to help you gauge when your steak is done. And unless the timer has run out, don’t poke and prod your steaks with tongs or your fingers, as it messes up the cooking process.

Poke your steaks only after the timer has run out.

To ensure your steaks are cooked properly, place them on a hot pan or grill. If you placed it on the heat and it doesn’t sizzle, then you’ve put it on too early and it isn’t hot enough just yet. Let it cook according to your doneness preference’s specified time without touching or poking. You’ll know it’s not yet ready if it fails the finger test and the meat is still stuck to the pan.

If you find that you can’t really take the meat away from the pan, it’s because your meat is still searing. Let it cook longer until it releases on its own.

If you’re using a grill, don’t press your steak down with a spatula. Some people seem to think that pressing their steak brings their meat closer to the fire, making it cook faster. But what they’re really doing is squeezing the juices out of the meat and onto the fire. If you remove too much of the juices, your steal will turn out dry and flavorless.

Let your steak rest on a plate so that it can use the residual heat trapped inside the meat to continue cooking. Stabbing it with a fork or immediately slicing it releases the juices that give your meat its succulent flavor.

You can start cutting into your steak at least five minutes after letting it sit. This gives the juices enough time to cook the steak evenly while spreading throughout the steak so it can be moister and flavorful. Serve your steaks on a plate or carve it into slices.

Your steak preferences determine the flavor, juiciness, color and softness you experience when you take a bite. It doesn’t matter if you prefer a blue steak or a charred well-done steak to have with a side of soft fries, just cook it properly to get the best flavor and toughness.